Invaluable to anyone conducting research in the state of Georgia, this book documents the name, rank, unit, and commission date of almost 10,000 men who served as officers in the state militia from 1798 to 1818. The officers served from the lowest commissioned rank of ensign all the way up to major general. It reveals more than 2,600 captains, almost 3,000 lieutenants, and more than 3,200 ensigns. They served in local companies and specialized artillery, dragoon, and cavalry units.

Prior to the late-1840s, militia units were most often described using the name of the officer in command, even after units were numbered. This book allows historians and genealogists to crossreference named officers to numbered units, which helps interpret census enumerations, tax rolls, and land lottery documents. 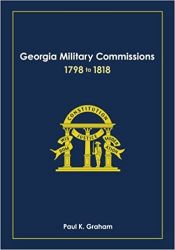