Buy the book on Amazon.com
$25 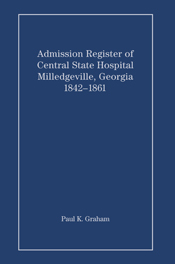 This book contains the admission record for the first 888 patients admitted to the Central State Hospital in Milledgeville, Georgia. The hospital, the state’s first mental institution, was authorized in 1837 and opened to patients at the end of 1842. Each patient record begins with a list of basic facts, with their name, county of origin, age, marital status, and other facts depending on the particular patient. The introductory information is followed by a description of symptoms that led the patient to the hospital, along with possible causes of illness. Records end with dates of admission then those for elopement (escape), dismission, or death. The number by each individual is the sequential patient number given in early admission records.

At its founding, the hospital was called the Georgia Lunatic Asylum. It began on a forty-acre campus, located south of Milledgeville near Midway, which has since expanded to 1,750 acres. The first superintendent was Dr. David Cooper, who was also one of the hospital trustees. The staff during the 1840s included the superintendent, steward, matron, watchman, two attendants, and two servants. Cooper served to 1845 when he was dismissed and replaced as superintendent by Dr. Thomas A. Green. Green instituted numerous significant changes, among them: abolishing forms of restraint, hiring white nurses (instead of slaves), and instituting a system of classification among patients. He served until 1874. The institution’s name was changed to the Georgia State Sanitarium in 1898, then to the Milledgeville State Hospital in 1929, and finally to Central State Hospital in 1967.

Three indexes can be found at the end of this book. The first includes every name, both patient’s and close contacts referenced in the records. The second index lists causes of commitment. Due to the nature of the records, a cause was not listed for many patients. No effort to index every noted symptom was attempted. The third index includes every location mentioned in the records. Place names with no state are in Georgia. Out-of-state locations are noted.

No major changes were made during the transcription process. Personal names were transcribed as they appear in the record. Where place names were misspelled in minor ways, they were changed without note (Bullock to Bulloch). Brackets [] were used to note major changes, illegible text, and clarifications. Throughout the text, minor changes were made to improve ease of reading; this included adding and removing commas, as well as changing capitalized common nouns to lower case.

Copies of the records transcribed in this book are available on microfilm at the Georgia Archives. Additional Central State Hospital records available on microfilm include admission records through the 1920s, registers of individuals buried in the hospital cemeteries, and operations records of the institution. For more records created since 1924, contact the hospital directly. Medical privacy laws apply.